Caution – if you don’t want to read my birth story, don’t read it.  And if you don’t like how something of it went personally, get over yourself and realize that this is MY birth story.  Every single one is different.  It’s not the story I had with Becca, it’s not the story anyone else would have.  God had a perfect plan to get Grayson here, and that’s what HE did.  Negative comments WILL be deleted.

This time one week ago, I was laying in a hospital bed.  We checked in to the “Women & Baby Center” at Christus Santa Rosa Westover Hills Hospital one minute after 9pm on Sunday night, May 25.  The check-in process took a while, and then the wait began.  The countdown to midnight.

After delivering a 7 pound 10 ounce baby girl that was too large for my womanly areas and having what was deemed to be “worse than” a 4th degree episiotomy, we had been watching the size of this little guy closely.  The goal was to induce at EXACTLY 39 weeks, so that I could have the vaginal delivery that I wanted, and hopefully avoid a life-changing, life-shattering second episiotomy by delivering a baby her size or larger.  Thus the wait until midnight – the wait until 39 weeks (for legal reasons).  The moment the clock struck 12, the nurse was in my room turning on the drip.  They were good – they knew exactly what needed to be done, and were there to set everything in motion.

I had been told the drip would be slow until 5am, when the doctor would be willing to come in if I was in labor.  For some reason, she preferred me to not deliver in the middle of the night.  Ha!  Beauty sleep, perhaps.  Hey, keeping the dr happy is important here!  And, slow is best.  So I laid around in a super uncomfortable bed, paced the floor in the tiny area that my fetal monitor cords would reach, and occasionally unplugged for the extra 6 steps needed to reach the bathroom.  But to say progress was slow would be an understatement.  I seriously felt like this baby was NEVER going to get here!

As they continued to turn the pitocin up, I learned the definition of “back labor”… never had that experience before, and I must say it’s not the best way to labor.  Certainly not in a hard, unforgiving bed!  At shift change, I said goodbye to my two fabulous night nurses, Brenna and Dina, and said hello to my new best friend for the day.  Jennifer was sweet, caring, and encouraging throughout the whole process – exactly the person you want by your side when you’re about to push a tiny being out of your even tinier girl parts.

By around 8:30, I was predicting when I’d need the epidural, but my contractions were spaced far enough apart, and all in my back, so I kept holding off and holding off.  Finally at one point, she let me know that the anesthesiologist was next door, setting up the epidural for that mama, and since he was now in the building, whenever I ordered mine, I’d be able to have relief in about 30 minutes from the time of the request.  I kept holding off.  My water still hadn’t broken, and I was really wondering why.  It broke so quickly with Becca.  I was hoping that the dr wouldn’t have to come and break it, and I was also a tad concerned because my external contraction monitor wasn’t registering very well (since they were all in my back), and there was talk of doing an intra-uterine monitor so they could have a better picture of what was going on.  My dilation progress was going slow, and they wanted to know why.

And then it happened.  I just shifted a bit in the bed, and I knew.  The dr wouldn’t be breaking my water for me.  Nope.  He finally decided it was time to move and break it himself.  Not too long after (though the time does seem to blur for me – maybe an hour passed), I said it was time for the epidural, and though I could have gone longer, I felt it wise not to get to the point of delirium like I had with Becca before asking for it.  I’m glad I did.  The anesthesiologist was very friendly, explained everything he was doing, and the whole process went really well until I told them “I’m feeling really dizzy”… they quickly had me lay on my left side, and the world began to right itself.  The sudden flood of relief from the pain was just a bit more than my brain could comprehend, I think!  Gave Cody a good scare though.

That was around lunchtime… so fast forward to about 3:00 and things were really getting underway.  My dilation was still slow, but I was making good progress, and they helped me turn to my sides every 20 minutes.  I got the epidural turned up when a touch of the power boost button didn’t provide any relief.  And then around 4:00, Jennifer came in to check me again.  I was an 8, and she told me that if I felt like I needed to push, I needed to send mom or Cody out to get her immediately.  She had me lay a certain way on my side with one leg bent a little.  I’m not sure how much time passed, but I know it wasn’t very long at all – maybe 5 or 10 minutes, and I felt the sudden urge to push.  Mom gathered her things and left for the waiting room, Jennifer was quickly there, they got me on my back, and before she could even check me, she said she could see his head.  Then the waiting began.

They attempted to contact my dr, but to no avail.  Multiple times.  You see, we were having horrible storms and what we didn’t know was that she was in HEB buying groceries, unaware that her cell phone had no service inside the building.  So while she shopped, I waited.  Jennifer and a resident dr were there by me with Cody non-stop, telling me not to push.  And with every contraction, Grayson was pushing his way down, trying to get out of the giant crushing machine that had been his safe haven for the past nine months.  Finally, the resident assured me she had delivered “some” babies before, and that if for some reason I got to the point where I HAD to push, she could deliver the baby for me.  Which did re-assure me some.  But thankfully, just after 5:00, Dr. Allsup arrived and everyone started prepping for delivery!  Before she could even check me, she said “Well, this boy’s got hair!”  Very reassuring for a mama who had delivery issues before – to know that he really was right there at the door ready to arrive.  She also seemed to think that his time sitting there might have helped things stretch a bit in a healthy way.  We hoped for the best, got ready, and waited for a contraction.  They were much fewer and farther between, because in the wait time, they had turned my pitocin WAY down so that my contractions wouldn’t be too hard and fast.  But, in three or four sets of four or five hard pushes, he was here!  The room was full of residents and new nurses, and everyone was cheering me on.  I felt like I had a full cheerleading squad right there to celebrate this amazing experience.  It was truly incredible.

I had expressed before delivery that I really only had three things on my “birth plan” – things I had learned from Becca’s delivery.
1. Do NOT try to get me to look in a mirror while pushing.
2. Do NOT try to get me to touch the baby’s head while pushing.
3. I WANT TO HOLD MY BABY ASAP!  (With Becca, I didn’t get to hold her until way after my episiotomy stitch-up was complete)
Jennifer had expressed that those three wishes would be EASY to follow, and that as soon as he was delivered, they could put Grayson on my belly/chest for me to hold him!  WOW.  I thought that sounded amazing.

But what I could never have expected would be exactly HOW amazing that was.  He arrived in this world at 5:52pm, and his daddy cut the umbilical cord.  By 5:53pm, my external monitors were off, and he was laying on top of me, screaming at the top of his lungs.  It was the most amazing experience EVER.  The first moment he opened his eyes, I was the person he saw.  Exactly the way it should be.  Perfect.  His daddy was right there with me, and we talked to him, comforted him, and enjoyed being with him while the hubbub of delivery clean up swirled around us.  It was like we were inside a snow globe.  We were stationery while the air around was full of excitement and activity.

I had a tiny 1st degree tear, but my dr felt it best because of my past to give me a couple layers of stitches to ensure perfect healing.  And then the amazing thing happened – we finally sent him to be weighed and measured.  And he weighed exactly the same as his sister – 7 pounds 10 ounces.  I had the delivery I wanted, and was amazingly fairly unscathed by it.  The extra 45-50 minutes of waiting on the dr was exactly what God had planned for my body.

Time passed, and Cody went out to the waiting room and brought Becca in.  She met her little brother for the first time, and it was truly a precious occasion.  Then the family came in – Cody’s parents and my mom where there, and everyone was in awe of this tiny little miracle.

We both did amazingly well – he passed all of his tests with flying colors, and I was healing so well that we both got to go home Tuesday night – released a mere 27+ hours after delivery.  The week at home went well as we slowly adjusted to life as a family of four, and got used to trading shifts in the night for feeding.  We’ve already conquered stomach issues with the first formula, and he is doing much better on this one, though at his two week checkup, our dr may switch him over to lactose free formula if he’s still spitting up this much.  Looks like both of our kids may end up lactose intolerant.  They are both the same blood type, weighed the same, look very much the same, but we know they will each be their own people, and we are anxious to watch and see Grayson’s personality emerge in the coming months and years.

My snuggle bug.  My little teddy bear.  Our little Ace.  Our handsome son.  Grayson Cody Hinnant.  I love you, sweet one.  You were worth every SINGLE moment of those almost 18 hours.  And always will be. 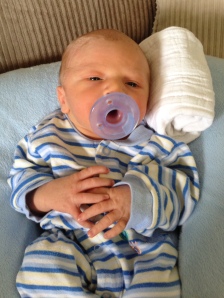