Wow.  Seriously.  This boy is already 4 months old!  Where has the time gone?  It doesn’t seem like it’s really been a year since we found out he was going to be joining our family.  After an agonizingly long pregnancy with Becca (even tho it was only 37 weeks long, it felt more like 370 weeks…), and an equally agonizingly long first eight weeks of her life, I fully expected Grayson’s pregnancy and first eight weeks to be the same.  Granted, the last two weeks of pregnancy felt like about 20… but all in all, it flew by.  It seemed like we had just found out we were pregnant, and then we found out he was a boy and did our big gender reveal for our parents on Christmas morning.  And then suddenly, it was May.  So I shouldn’t be surprised that he was born on Memorial Day, and then suddenly it was 4th of July, and then the start of football season, and then the 26th.  Again.  Another month passed.

Our little man is growing rapidly, learning to roll over, making lots of talking attempts, and successfully saying “mama.”  He loves looking at himself in the mirror, and is a Tummy Time SuperFan.  He knows his way around the dinner table, and is constantly wanting to eat.  He LOVES his sister immensely.  She can get him to smile bigger than anyone else, and he loves to just sit and stare at her while she plays, eats, talks… well, while she does just about anything.  He’s definitely Becca’s number one fan.  And she’s his.  They are super cute together.

Before we know it, the next 4 and 8 months will have passed, and I’ll be writing about our little one year old.  Determined to enjoy every moment, and cherish every milestone! 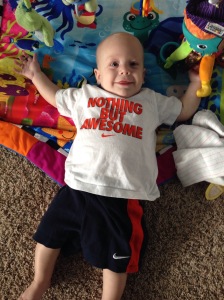