In an effort to turn around my attitude as a mom, and to make parenting a two year old somewhat more enjoyable, I have tried to start saying “yes” a whole lot more often… and “no” a whole lot less.  She says “no” enough for the both of us!  HA!  I like this article that Ashley over at Play at Home Mom wrote about saying yes to her kids.  Obviously, I’m not her, and she’s not me… and I don’t say “yes” all the time.  But I’m working on responding in a positive way instead of immediately saying “no” to something.  Giving her a sound reason- like, “well, if we do the puzzle now we’ll be late for dance class.  How about we do the puzzle when we get home and aren’t going to miss dance?”  Instead of saying “no – put that away,” when she gets out a puzzle right before we need to leave.  If I just say “no,” old world order would say that she as a child should immediately stiffen up straight, say “yes ma’am,” and put the puzzle back.  But I don’t have a robot, or a trained seal, for a two year old.  She has her own (very strong) brain.  When I say “no,” her first response (in her brain) is “why not?”  But if I instead tell her we’ll be late for dance class, and suggest that she do it later, that gives her the reason why without her ever going on the defensive.  It doesn’t mean that at this option for a fork in the road she’ll jump and run to put the puzzle away, but she is FAR more likely with this response from me vs the immediate “no.”  I’m also finding that simply following the “no” with the reason isn’t good enough.  When she hears the word “no,” her brain shuts down and goes into defense mode.  She is no longer the receiver downfield just waiting for whatever I can throw her way, she is suddenly on defense – for the other team – fighting against me.

So by now you’re wondering – how to lily pads play into all this?  Well, a couple of afternoons ago, I was washing bottles (I’m forever washing bottles), and she started throwing all the pillows off of the couch.  (We have one of those couches you can rearrange the back cushion – it’s all just big pillows.)  Now at this point I could consider the fact that I really need to vacuum, and our living room floor probably isn’t the cleanest, or I could just say, what harm is there? and move on, which is what I chose to do.  She proceeded to stack the pillows and crawl over them, lay them out and hop from one “lily pad” to another, attempt to hop on one foot, and then when she got tired, she grabbed a catalog and laid down and started flipping through.  What harm is there in letting a kid be a kid?  NONE!  She loved it, she had fun, and… BONUS!  She WORE HERSELF OUT!!! 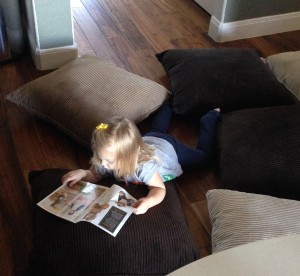 Am I saying that the word “no” shouldn’t exist in your vocabulary with your child?  No.  But what I am saying is that you pick and chose when to use it wisely.  When your child runs away from you in a parking lot, begins to start crossing the street in front of a car, starts to stick his/her hand in the fireplace, marches barefoot toward a fire ant pile they haven’t seen… dangerous situations call for an immediate “NO!” and sometimes it is shouted forcefully.  THAT IS OK!  Especially if you don’t use the word “no” very often… it immediately tells your child that this is a safety situation that could be very dangerous, and if they aren’t used to hearing it, it will likely stop them in their tracks (or you can hope it does, anyway).  So many things in life can be “yes” – even if it’s a “yes, later” answer.  If you don’t want your five year old getting her ears pierced, then when she asks, perhaps a better response would be, “I think you will be beautiful with your ears pierced, but I think you need to wait a few years before you get that done.  Let’s re-visit this idea in a couple of years.”  If she pushes further, the answer is not “I said, no!”  The answer is, “Let me talk to your Daddy and we will come up with an age we think is appropriate for you to get your ears pierced, and then we’ll talk to you about it and make a plan.”  Then do it.  Follow through.  If it’s something like this that is simply in your mind not going to happen until a certain age, then stand firm!  Don’t lose your backbone because your child begs.  But don’t just give them a “no” comeback.  Involve them in the process.  Tell them your reasoning.  Especially with an older child.  Work  on answering “well, how about we….” I’m still working on this.  It’s a long road to walk to change your behavior.  But since “no” is instilled in us from the very beginning (simply by the osmosis of being alive on this planet), we have to work at becoming “yes” parents.  I’m willing to take the challenge.  Are you?