This blog post contains affiliate links.  I appreciate you purchasing items from this post!  Thank you in advance.

“Ooo they’re cold and swippery!”  I knew she’d love water beads.  I’ve read about them LOTS of places, I’ve had friends recommend them, and she even played with them several months ago, but her hand coordination wasn’t good and they went everywhere and I just gave up and sort of forgot I even had any.  So, today during her nap I pulled them out, hydrated them, and when she woke up, it was time to discover!!  I had the water beads in a container with a good lid – for storage later – and pulled out my set of 11 circle cookie cutters for her to explore as well.  (This is the set I have…affiliate link)

Here is how I presented the tray.  The only instruction I gave was to remind her that all items must always stay inside our tray – they don’t go on the table or the floor.

She had so much fun playing with them.  She started by putting one bead into each circle.  Then, she started experimenting with their abilities to bounce.  I had a ton of fun playing with her, and I actually bounced more out onto the floor than she did!  She had such fun, that I went and got Cody to join us… and then we all three had fun together playing with them.  (He’s to thank for the totally awesome photo at the top of this post).  The cool thing we discovered was that the blue beads looked green on the yellow tray… so I went and got the red tray, and all three of us sat in amazement as they suddenly became purple!  And then, they were blue again when we put them back in the storage container!

She also became fascinated with stacking the nesting cookie cutters, so we ended up having a short impromptu assessment of her “largest” and “smallest” skills.  She’s definitely got those concepts down solidly.  Always good to know where you stand on various skills!

I’m looking forward to letting her play with the water beads again soon – and finding something new to do with them.  You can bet I’ll be reading up on my favorite blogs to get ideas, and of course, I’ll share what I finally come up with. 🙂

Total Prep Time for Mommy:  To hydrate the beads, I dumped them in a container and added water (total time there, about 20 seconds), then they sat for about 3-4 hours while I did other things.  To gather the cookie cutters, container, and tray, my total time was about 1 minute.
Total Play Time for Becca: We played for a good 45-50 minutes, and could have gone longer, but she decided to be disrespectful and we had to put them away.

I keep seeing posts from Play at Home Mom LLC and Kids Activities Blog and Living Montessori Now that involve sensory play.  And honestly, I do a fairly good job of letting Boo experiment with a variety of textures and such, but sensory bins are something I’ve really only just pinned on Pinterest (follow my boards here), but not created.  Ok, so I made one.  I was really proud of it.  It was this Sesame Street XO cereal, and I put hearts and pink and red stuff in it for Valentines Day.  I was so proud.  And then I actually pulled the Valentine’s Day stuff out and put a bunch of green stuff in the same cereal and it was ready for St. Patty’s Day!  But since then, well, it’s still Becca’s “Green Stuff” in the family room.  And, I would seriously think before I’d consider feeding my child the Sesame Street XO cereal, ya’ll… b/c the stuff is STILL intact and has not even come CLOSE to disintegrating yet.  Kinda gross.  But it’s still in the same condition it was in inside the box.  Anyway, I digressed.  All of that to say, I haven’t done much with having Becca dig her hands in things… so this week we are busting out of our normal mold!!  I started with a bucket of dried beans. I stuck twelve purple “shineys” (pom poms) down in the beans, and just presented her with this tray:

She immediately started digging in, and started singing her alphabet song.  I’m not really sure where that came from, but it inspires me to want to try a sensory bin with letters hidden in it – SOON!

Then, I went and got this ice cube tray and gave it to her to see what she would do.  Without being prompted, she began to fill the holes with beans.  She really enjoyed taking the beans in and out of the stars.  I was surprised how focused she was on the beans, not the pom poms.  But, I think it’s because she’s played with them before – the beans were new. 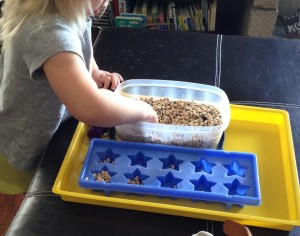 Then, I gave my first instruction of the activity (other than helping her put the lid below the tub b/c she was very frustrated when not everything would fit on her tray…. she had learned that rule well!), and asked her to take the beans out of the stars and see if she could put one pom pom in each star and use them to help her count.  One to one correspondence is a skill for a much older child, but she can do so many things that are more advanced than that… just not one-to-one correspondence counting.  So, we are working on it.  And it really helped to practice putting one pom pom in each star!  She also then discovered that one was still hiding, because I told her she should have one for each star.  The hunt was on, and she had so much fun digging for that last piece of buried treasure!

All in all, this was a fabulous activity, and a great into to sensory bins for me – the preparer.  I’m excited to set up more sensory bins for her soon… and you know I’ll share, so check back! 🙂

Total Prep Time for Mommy: 2 mins (dump beans into bowl, grab pom poms and poke them in, set up on tray)
Total Play Time for Becca: 15 mins (I think she would have played longer if not distracted by guests.)