As I have been racking my brain trying to think of good hand-eye coordination activities that also include math, this was a fun one I came up with using a styrofoam ball that I cut in half, and pipe cleaners that I cut into quarters.  These spiky haired dudes are super funny, apparently, because giggles abounded when I brought them out.  Then we worked on patterning by threading the colored beads onto the “strands” of “hair.”  I would start a pattern, and she would continue it.  She also liked sorting them by color so that one strand had only purple or only blue.  This was the first time I really worked with her on patterning, so I was amazed to see how well she did – I even introduced an “AAB” pattern, and she repeated it like a pro.  Her attention span of adding to each strand was short – so sometimes she would just say with color came next, which I thought was just fine.  I have left this activity where she can reach it – still on its tray, with all beads available for use, and she keeps coming back to it at various times to add more beads.  She says it’s “super fun, Mommy!” 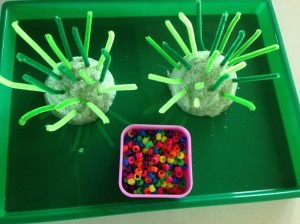 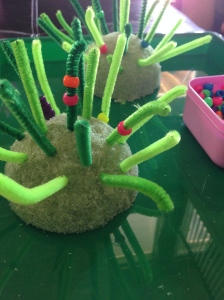 I had to show her how to put the first bead on the pipe cleaner – she was unsure what to do with them, which kind of surprised me because she usually does really well with invitations to play, and figures out on her own what to do, but she was trying to poke the beads into the styrofoam, which was NOT what I wanted her to do.  After a while, she got obviously tired, so I dumped the beads out on her tray, and grabbed her bulldozer, which was nearby, and let her have fun pushing the beads around. 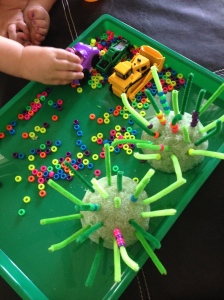 Total Prep Time for Mommy: About 5 minutes – since I had to cut the styrofoam ball and the pipe cleaners and then stick them in, and try to find a little bowl for the beads.

Total Play Time for Becca: In the first sitting, she played for 30 minutes, but has gone back to the tray several times for 2-5 minutes at a time.