Part of being a mom is learning to step out of your comfort zone a little.  If anyone had told me that I’d have a conversation about electricity with my two year old and then allow her to look through the scrapbook of our house being built to try and find the electrical trench dug from our box at the street up to our house, I would have told them they were crazy.  But, that’s just the kind of world I live in.  I have to be willing to converse with her about electricity and other amazingly “out there” concepts… and, I have to be willing to let her look through my scrapbooks – because not only was she WAY more careful than I would have ever expected, but she was AMAZED and totally in awe of seeing what our house looked like before we moved in – she loved pointing out rooms she recognized from the pictures, and thought it was so cool to see the balcony before the banister was up, and her bedroom with just the carpet pad – no carpet.  Sometimes I have to be willing to let go of some of the things I hold “sacred”… and take a leap of faith that she’ll find them as sacred as I do… 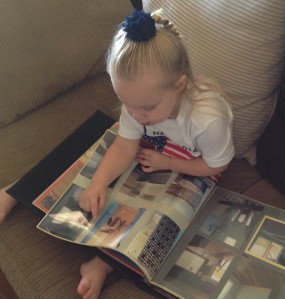 Another thing I’ve had to be willing to do is allow her to have a drawer in the kitchen.  She LOVES to sit and pull everything out of her drawer and sort it, pretend to cook with it, etc.  And I have to be willing to step past my OCD issues about kitchen items on the floor, and just let her play.  Let her discover.  Let her learn.  When I do, it’s SO worth it.  She played in her drawer and was content while I worked around her for over 40 minutes!!! 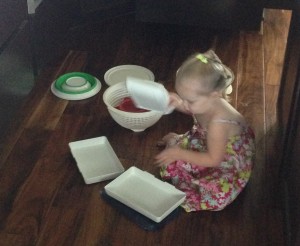 I’ve never done “fun food” until today.  Because being a mom is about being willing to try something new.  She LOVED the face I made for her, though despite my best efforts, the cucumber did not get eaten.  She DID take a taste, though, and concluded that it was crunchy before she decided to spit it out.  Maybe I’ll keep trying to make food more fun, and eventually, she’ll get enough tastes that she’ll start eating!  This article from Super Healthy Kids has some great tips we are starting to employ in our household!! 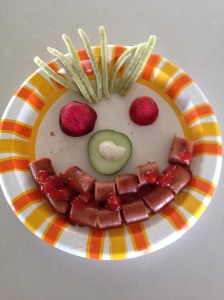 Being a mom is also about being willing to deface your home a little bit just for the fun of it!  I saw this idea about covering light switch plates with washi tape (that now I can’t find because I just saw it in passing on some blog’s fabulous FB post somewhere), and I decided that Becca’s room needed some washi tape plates.  She declared they were “so pretty” and “beautiful Mommy” several times.  So yup, it was totally worth trying something new.  Heck, sometime when she’s not in the room I might even take off all the electrical plates and do them, too.  Because it’s not in my comfort zone to do that… and being a mom is all about being willing. 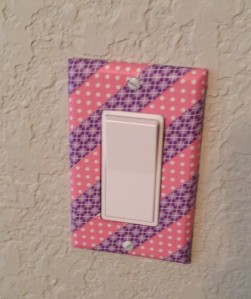 It’s about being willing to let my hubby play the most annoying song ever created to our daughter to hear her giggle hysterically and then watch them snuggle on the couch to read the book.  Yes, if you didn’t know, there is a book titled “What Does the Fox Say?”  The illustrations are super fun.  The text?  Well, it’s the words to the song…   (And no, we did NOT buy the book.  We checked it out from the library… I’m only so willing.  HA!  BUT, if you love the song, you can buy the book from my affiliate link here 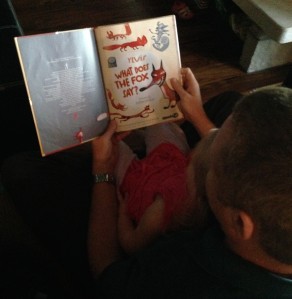 What have you had to be willing to do that you weren’t sure you could handle?  Is it being willing to get up at 5am so you can have 30 minutes of your day by yourself?  Is it being willing to share your favorite smoothie because you know that it’ll get your sweet one some good vitamins and they’ll only drink it because it’s yours?  Being a mom is about being willing. Yup.  And it’s not always easy, but when I step out of my comfort zone with Becca, it’s usually always fun.  Because I have to be willing to accept the fact that my brilliant, beautiful little girl is more grown up than I give her credit for, and is always ready to prove herself.

3 thoughts on “Be Willing”