For those reading this who have already had snow this month, this activity might not be for you… but for those in South Texas, where it’s still hitting 90+ every day, this activity is still quite in season.  To set it up, I hauled our water table inside, dumped in a bunch of water beads into the table, and let her play for a while.  Then, we added ice cubes of various shapes, and she played for a while – but she wanted a spoon b/c they were just “too too cold, Mommy!”  HA!  Over the course of about an hour, she kept coming back to the table.  Then, we decided (mutually – mainly her idea) to see if we could melt the ice cubes faster.  I suggested that we could try Mommy’s hair dryer.  She said, “no, probably not.”  So I said, “well, we could try salt!”  She thought that was the silliest idea she’d ever heard.  So, I got out the ice cream salt and she helped me dump the salt on top.  The ice, of course, started to immediately melt.  And so did the beads.  It was really cool – they started to split and dissolve, and we were both really into it.  It was fun.  A mess to clean up later, but fun. 🙂 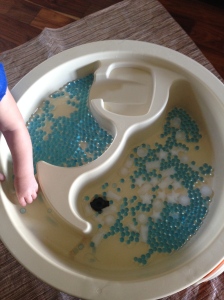