So, if you’ve been following my blog for any length of time, you know that Becca is what is termed by professional educators as “gifted.”  Most of us “normal” folks think pretty much inside a box – even if we are high achievers.  Well, Becca doesn’t have a box, or even really know what it would be like to be inside one.. unless of course, it’s that big box in the family room that she likes to pretend is a car, or an airplane, or… a rocket.  Becca’s main interest at almost 2 1/2 (in just 5 short days!  WOW!) is outer space.  She’s quick to tell you she’s going to go to the moon some day.  And Mars.  And Saturn, too.  And who knows, maybe some day she will.  She enjoys watching “This Week at NASA” with me, and often has questions that I have to google the answers for because I’m a little clueless when it comes to deep space and techy-science stuff.  We are learning a lot together about our space program!  She’s certain one day she’ll live on the ISS (International Space Station).  And if this interest continues for her, maybe she will.  (The sky isn’t her limit… deep space is her limit!  Heaven help us the day she first sees Star Trek…)

So, we’ve of course been tracking the creation of Orion, and we anxiously watched and waited on the 4th for it’s launch.  I woke up early and began tracking everything, taking screen shots on my phone of the launch pad as I waited for liftoff so I could show her… ready to go get her up if it was really gonna happen.  Well, so, I waited, and waited, and if you, too, were tracking Orion, you know that liftoff did not occur on the 4th.  I got her up near the end of the time window, and she came down and ate her breakfast in front of the tv, anxiously hoping that maybe they would be successful.  Here are some of her responses as she watched the rocket sitting there, not moving:

In response to being woken up and told the rocket was hopefully going to launch soon: “I’m gonna go on that rocket all the way to Mars!  Are you gonna go too?”

“When’s it bwasting off, Mommy?”

“Is it moving, Mommy?

“That’s a big rocket!  It’s gonna bwast off.  The grass is shaking!”

Hearing that the launch has been cancelled:
“Mars… but they’re not going!”

Yup, the girl was super bummed out, and unimpressed – as you can see in the pic.  So, as you probably know, the very first Orion test launch time on the 5th was successful, and I had it cued up on the dvr to show her when she got up.  So, we once again had breakfast on the tv trays in the living room while having our watch party for Orion.

In response to being woken up and told the rocket had, in fact, successfully launched and we were going to get to go watch it: “Oh wow!  Mommy they aren’t going to Mars today.  They’re gonna go around and around the Earth.  But I’m gonna go on ‘Rion to Mars.  I am.  Let’s go see!”

So she sat there through the countdown, anxiously awaiting, and I got this video of her watching.  (Turn your volume up so you can hear the tv narrator.)  Her comment is epic… and the expression on her face is priceless.

She sat and watched with rapt attention through the first 5 or so minutes of the flight, as each stage successfully broke away.  We had to leave to go to an appointment, and haven’t had a chance yet to watch the splash down, but it’s saved on the dvr and we’ll watch it soon.

The next morning, after having had some friends babysit for us that night, she showed me a rocket she had built in her room out of Duplo flowers – all stacked high, and sitting on top of a “launch pad” of Duplo bricks.  She told me she made ‘Rion but it breaks apart.  Proceeded to run over, grab her rocket, and fly it through the air, breaking off flowers and dropping them “into orbit” before leaving just a final set of two flowers.  “THIS is ‘Rion, Mommy!  It flies around WAY out in space and splashes in the water and becomes an airplane!”  (yup, still has that 2 1/2 year old imagination!  HA!)

I love her fascination with space, and I want to encourage her in every way I possibly can.  The struggle always is to remember that it’s totally ok if she doesn’t become an astronaut for real.  Because her interests will change, and her skills may excel elsewhere.  And that’s ok.  But for now, she’s my little astronaut-in-dreams and it’s super fun to call her my own little space cadet.  Her daddy and I are so proud of her and so amazed every day by the things she comes up with.  Her brain is beyond our understanding, and we pray we are always exactly the parents she needs us to be.

Some Orion photos for you: 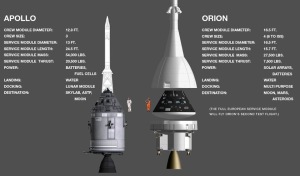