But I can’t help… falling in love… with… you.

January 20.  It’s here again.  January 20, 2007, was just like any other day.  I can’t tell you anything that happened that day.  It wasn’t special.  It was totally ordinary.  But it was the last January 20th I’d ever spend alone, and that makes it stand out.  On that day, I had no idea that in one year my life would change drastically and entirely.  Because on January 1, 2008, I discovered Cody Hinnant on match.com.  And January 5th we met in person…

He asked, and I said yes.  It was a fools rush, to be sure.  But it was meant to be.  June 11, 2008, we were married.  And here we are, seven years later, with two beautiful children.  It hasn’t all been a bed of roses.  In those seven years, we also have two children in Heaven.  We lost his grandma.  We endured nine long months of building a home and living with a friend.  Before that, we endured several VERY long months of back and forth between Edmond and San Antonio living in a Residence Inn hotel with our two Border Collies and the grueling nine hour drive back and forth and back and forth every couple weeks.  These seven years have included H1N1, a diagnosis of Rheumatoid Arthritis, four pregnancies, two deliveries, and one gallbladder removal – all from me.  (Cody definitely got the raw end of the “in sickness” part of the vows. HA!)

But in those seven years despite all we have overcome and worked through, we are happy.  He is my rock and I’m his shoulder to lean on.  He has patience with Becca when I have none.  I have patience with Grayson when he has none.  We are a team.  We are best friends.  And we are blessed.  Beyond measure.  Because of Cody, I truly believe in love at first sight.  We may have been fools to rush in, but when it’s meant to be, it’s meant to be.  And I’m so thankful that my engineer who plans everything perfectly and researches and waits til the right time to make decisions didn’t take more than 15 days from the time he laid eyes on me to pop that question.  Down on one knee in front of the fireplace in what was to become our home there in Edmond, Oklahoma, he asked me if I’d marry him.  He presented me with a ring made from Legos, and my answer then is the same as it is today and always will be.

Yes, my dear, sweet, wonderful man.  Yes.  I will spend the rest of my life with you.

Yes.  I will love you with every fibre of my being.

Yes.  Always.  Until the moment I pass from this Earth, and even beyond into Heaven for eternity.

I love you, Baby. 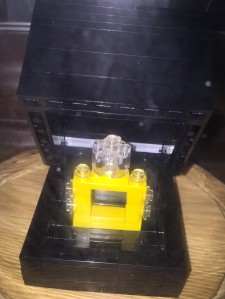 One thought on “Wise Men Say… Only Fools Rush In…”