I’m not going to begin to put an age level on this lesson because I’ve sort of lost all realistic memory of when is the “right time” to do this type of activity.  SO, I’ll say that if you think it might be time for your child, you might be right!

Graphing is so much fun.  And it’s even more fun when you add in a technology element and work with your child to set them up in Excel or Numbers!  I have a Mac, so our work was done in Numbers.  The first step before creating any graphs, however, is to collect data.

I came across this insect survey free on TPT and thought, somehow I have to make this work for Becca even though there isn’t a class full of kids to survey!  Enter social media.  I polled Facebook through my page (thanks to several friends and family members who shared my post!) and we received over 30 responses!

As I scrolled through the responses, I would read them out to Becca, and she learned about making tally marks.  She would mark the sheet, and then once we had recorded all of the answers, we counted the marks and I wrote how many of each insect had been “favorited” by our participants.  Making tally marks was a new experience for her, and she wanted to circle the groups of four instead of making a line through them for five to group them together.  Cody and I were both there for this lesson, and we had to explain to her that this isn’t something you can do however which way you want – to make tally marks, this IS the way to do it.  No other options.  She wasn’t real sure about that, which I dealt with again with her when we did our second grouping of data, which I’ll talk about later in this same post.

So, once we had the numbers for our insects, I pulled up Numbers and immediately set up a little data table.  She read off the insect names to me and how many of each one.  Then she decided what title we should put on our table.  I knew that I wanted to teach her about pie graphs AND bar graphs (she has seen some bar graphs before, but it’s been a while), so I first put the information into a pie graph, and she was immediately intrigued – she helped me select the colors that she wanted, and was very pleased.  She started asking questions about what % means… and I skirted around it by simply saying, it’s what part of the whole group it is – sort of like fractions.  She said “oh” and was actually content with that.  No doubt  percentages will be entering our math time very soon.  Then I let her select whether she wanted a vertical or horizontal bar graph, and she selected the color.  She decided that she needed some pictures of her top favorite insect to make it look a little “happier,” so I pulled up Google images, and had her type in “butterfly.”  She selected the image and I showed her how to save it.  Then she also saved a dragonfly and a ladybug.  I showed her how to import her photos into the document, and once I got them the right size, she dragged them to where she wanted them.  I had her tell me about her graphs and typed her words onto the “poster” as well.  We printed it out on card stock, and she was so proud to show her daddy!

Then, a couple days later, we colored Easter eggs with some dear friends.  And we had ALL. THESE. DANG. EGGS!  What to do with them all?  So after she had spent a good amount of time sticking butterfly stickers all over them, we sat down and made a tally of how many eggs we had of each color, and I had her draw a bar graph on paper so she would have the physical concept of what the bars show.  We talked about how “this is what three orange eggs look like in real life, and this is what they look like in tally marks, and this is what they look like on a bar graph!”  She said “that’s cool let’s put them on your computer.”  Hey, what can I say?  It’s really fun to make “graph posters” on Numbers!  So, for ease (and because it was almost bedtime) I pulled up her previous file, renamed and saved it as a new file, and then had her tell me the new data to type in.  She was quick to notice that I needed to change my titles on the data table, and told me what names I needed.  Instead of types of insects, I needed colors of eggs!  She decided this poster needed different graph colors, and of course it needed Easter egg images.  We also edited our text, and in about 7 minutes, we had a whole new graph poster about our Easter eggs!  We printed it and she was so excited again to show it off to her Daddy! 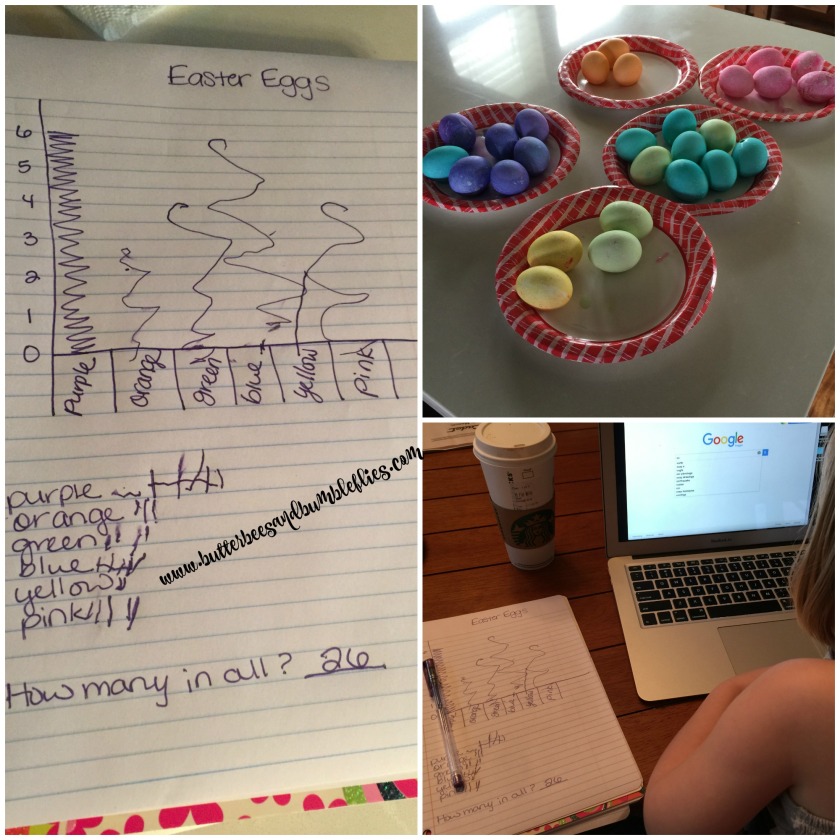 This is a super simple way to get your child talking about Science and Math AND to incorporate the Technology aspect of STEM as well.  Don’t have a computer or experience with Excel/Numbers?  No problem!  Drawing on paper can be awesome as well – you could draw on copy paper, cut them out, and post them onto a large sheet of construction paper!  Clip photos from magazines, or illustrate yourself with paints and markers!

I’ve noticed since doing these graphs, Becca is much more interested in Math again – not shying away from addition and subtraction story problems, and excited to count and sit to learn new math concepts as well.  Remember – Math HAS to be FUN!!!  Make it that way! 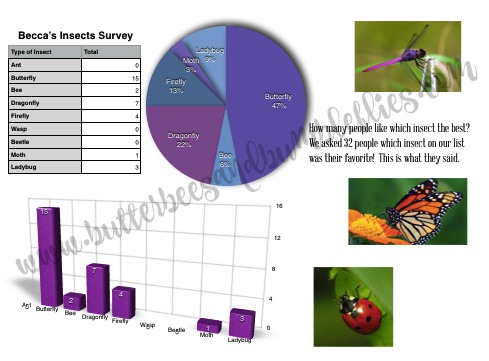